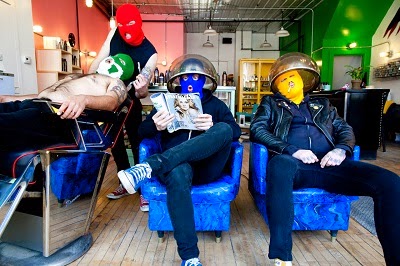 Guys, I already liked your debut, but I really love "M.I." - the improvement is amazing. Any explanation why you've become so much better?

Thanks! Basically, Fat Mike pretty much told us that, if enough people liked the record, we could probably all get girlfriends. That really stoked us out, cause we really like girls. Largely because they are pretty and smell nice. So, we definitely worked harder on this record than on the first one. We just knew that we had to do the best we could, so we really pushed ourselves. Plus we're a better band now than we ever have been, on account of all the experience we've had on tour. Matt Allison, who produced the record with us, really threw his back into it too. He killed it. So, anyways, thanks!

Your lyrics usually deal with girls, crime, or girls and crime. Which topic is more important to you?

That's like asking which of your legs is more important for standing up. I mean, without either one, standing is gonna suck for sure. So, like, by analogy, if you don't have both girls and crime, shit sucks.

You write amazing love songs - is it easier to do this when you're in a relationship or when you are single?

I figure, if you're in a relationship, why write songs? You should spend your time being happy. Writing songs is for miserable assholes. I think it's easier to write when writing is the only thing you've got going. So, single. Writing is actually even easier when you're in prison, cause you have nothing else competing for your attention. I mean, other than watching your back to make sure you don't get shanked.

And which girl did you have in mind when writing "The most beautiful girl"?

Ah, ok. In general: Is it easier to date girls when wearing ski masks or does it make things more complicated?

I would say it makes things more complicated. If nothing else, just cause girls are usually creeped out by the ski mask thing. I mean, I get it, you know, we're technically "creepy" "weirdos" that allegedly "rob people" on the regular. Which, by the way, is allegedly very profitable. I have allegedly enjoyed the added spending power which stealing gives me, and I'm not ashamed. Allegedly, i mean. But, yeah, girls are a mystery to me.

Songs such as "Stars" are amazingly romantic. Is this just  how you are - or a trick to make girls fall in love with you?

Ok. Then let's talk about another song: "Almost Like We're Already In Love" - not many Pop-punk-bands would be able to write such a cool acapella-doo woop-song. I assume you would have also been pretty successful in the 50s - don't you think?

I don't know. The 50s we're a different time. When I get to thinking about what I would have been like back then, I start to picture myself in black and white. Gives me the heebie jeebies. So, I guess I like to think about us in the 70s more, when everyone had a color tv. Unfortunately, i dont think we would have been that successful in the 70s on account of the fact that we will not wear spandex on stage. I mean, that shit isn't that cool. Rhine stones are pretty tight, though, I guess. So, who knows.

I guess "M.I." will be among the best punk records of the year. Which other bands would deserve to be in the Best of 2014-list so far in your opinion?

Aww, thanks! That's a tough one... Lots of great records out there, and I hate to pick favorites. I definitely dig the new Banner Pilot. I also got to hear some unreleased stuff from the Copyrights which I think is gonna melt face when it comes out.

Let's talk about your masks. When you started the band, how did you actually decide who wears which colour? Were there fights and arguments because of the masks?

We actually already had all of our own colors when we formed the band.  It was a real instance of serendipity.

Did Fat Mike want to take a look under your masks before signing a deal with you?

I don't think so. I mean, he didn't say anything about it. We have an understanding. Nobody knows what we look like without the masks. Not even us.

Ok, one more thing: Do you prefer not to be asked about Chixdiggit anymore?